From very humble beginnings in the City of London in 1844, YMCA has grown to become a worldwide organisation with 45 million members. 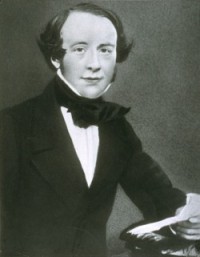 YMCA was founded by George Williams – a worker in the drapery trade in London. Concerned about the welfare of his fellow workers, he started a prayer and bible study group. This soon grew and attracted men from across London.

YMCA begins to address other concerns of young men working in the cities. Public lectures and education classes are developed. Reading rooms and refreshment areas help young men to adjust to urban life.

YMCA spreads outside London and branches are set up in Manchester and Leeds.

Following links made at The Great Exhibition in London,  YMCA spreads across the globe and YMCAs are established in the USA and Canada. Seven years after it was established, a YMCA is formed in Boston, USA.

The idea of creating a global organisation is pioneered by Henry Dunant, who would later go on to found the International Committee of the Red Cross. He convinced YMCA Paris to organise the first YMCA ‘World Conference’.

The conference produces the ‘Paris Basis’ – an agreement about the aims of YMCA. It also sees the launch of an international committee and headquarters, which would become the World Alliance of YMCAs.

The first YMCA holiday centre is established on the Isle of Wight. Their huge popularity led to another 25 centres being opened. Billy Butlin later adapted the idea by creating purpose-built holiday camps.

The British YMCA incorporates personal fitness into its programmes and opens its first gym.

The American YMCA invents basketball and goes on to invent volleyball in 1895.

On the 50th anniversary of YMCA, George Williams receives a knighthood from Queen Victoria.

The World Alliance of YMCAs celebrates its 50th anniversary. There are now YMCAs in 45 countries with a global membership of over 707,000.

George Williams dies at the age of 83 and is laid to rest in the crypt at St Paul’s Cathedral.

YMCA was an early influence on Scouting and the first Scout troops meet in the Birkenhead and Nottingham YMCA buildings.

The first purpose built hostels are opened in Cardiff and London.

During the First World War,  YMCA supports the troops. YMCA huts provide soldiers with food and a place to rest on the frontline or at home in military camps and railway stations.

YMCA embarks on a massive education programme for soldiers, which eventually becomes the Army Education Corps.

The red poppy is introduced by an American YMCA worker and goes on to become a worldwide symbol of remembrance for those lost in the World Wars.

A YMCA employment department is set up in England to deal with unemployment. It finds jobs for 38,000 ex-servicemen.

The post-war period to today

The British Government publishes the Albermarle report about the need for better leisure facilities for teenagers. This results in many YMCAs beginning youth clubs to promote young people’s personal development.

YMCA George Williams College is established in London, providing training programmes for professional youth workers. Today, the college is one of the leading trainers in informal education.

During the 1970s, YMCA increases its emphasis on young people most in need, focusing on homelessness and unemployment.

YMCA Training for Life is launched, in response to high unemployment among young people. This results in the creation of YMCA Training – one of the UK’s leading vocational training organisations. YMCA Training has supported over a million people to date.

Y Care International, the overseas development agency of YMCA in the UK and Ireland is established. Today it supports projects for vulnerable young people in over 20 countries worldwide.

YMCA has over 58 million members in 119 countries worldwide. Since it was established, YMCA has adapted to the changing needs of young people.

Today it works with young men and women regardless of race, religion or culture. In every corner of the world,  YMCA is helping young people to build a future.

This error message is only visible to WordPress admins